The megastar James Charles get all limelight and troll from his millions of followers after sharing his nude picture on Twitter in a weekend, after hacked his twitter account.

James posted his nude selfie in the Bathroom while showing his butt. He posted this picture just after his account was hacked and in the caption he said, hi, I got my account back! 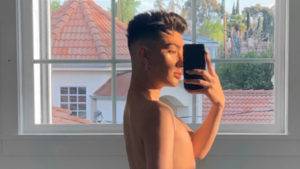 He shared this image only to prevent his account from the threat of having this held in the future.

He said, Just in case he hacked again, this is the only picture I have ever taken and posted. Also, he wrote, “Can’t threaten any more. Get a life.”

Lots of his followers trolled him via commenting on his posts. One said, no asked for this from you, Charles. And James replied, yeah. I just posted this picture for the security purpose in future so this can never happen again. This is my way to take that situation, move on your day.

He also replied his another follower who talked about his nude picture. James said it’s a butt, move on it.” 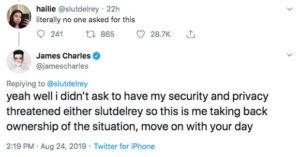 Apart from all these, the sexy picture has been shared and got liked more than 200,000 times.

Everyone shared their reviews. Some take this as hilarious step and some it as a bold step.