Recently, the trending news hyping the market that a metal detector finds 99 old silver coins which are estimated as worth Rs 43.43 lakh. The man is from England found 99 coins in farmer’s land, Suffolk with different denominations such as pennies and halfpennies.

What Don Crawley say about it? 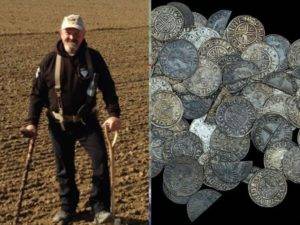 The name of the metal detector is Don Crawley and he has shared his amazing experience with news channels. He said it was my first official visit to farmers’ land in Suffolk to detect metals. I was detecting metals and my Deus detector points strongly within a short space and I had found 93 silver coins.

Also, I found six more coins after getting investigation approval from the Liason officer. In total, I found 99 coins in which 81 are pennies and 18 halfpennies.

The British Museum identifies the coins and says these are silver pennies from the Ad 978-1016, the sovereignty of King Aethelred II. Dix Nooman said, the silver coins are of two types of long cross-type and Crux type, which often considered as buried coins from AD 997-1003.

He also said we are feeling pleased that we have found this unique present, rare mints. These coins will be auctioned in December, he added further.